NOTE: All postings from persons calling themselves "Anonymous", "anon" or similar will be deleted

Newest article: Most and Vip Escorts Agency by hotsurbhiranaToday 07:02Today at 07:02:34view thread

I was told that the flight was cancelled on Saturday... 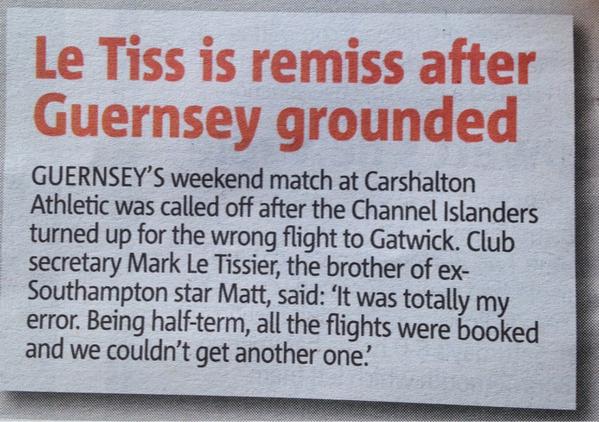 they will get away with it. Imagine another club forgetting to book a coach or make adequate travel arrangements!!! Just another reason why this team should not be anywhere near this league.It just to costly an exercise for all parties. At the end of the day most clubs at this level are run by volunteers and the extra work involved by getting to Guernsey is just not worth it. They allocate so many places on the plane, then tell you how you can fill it!!!! And then moan to the league if a person on the list cant be found on the web site as an official. Then the league phone the club to make sure all on board are officials!!!! Why does the league make the calls. If each team are allocated 30 places, then it should be upto the club involved to decide who they take. Its not like their supporters are going to be outnumbered is it. It;s just them trying to save a few quid. Well the league should grow a backbone and say that 30 means 30 and not be a pick and choose to what Guernsey like. Also many people cant get the time off to visit Guernsey and it still expensive if you do. I dont care for their excuse that they have to travel to, so it evens up. That is cods wallop, its their choice, its not ours.And most of their y players i bet are paid, or are heavily sponsored, so dont have a problem been given the time off. Rant not quite over, but i will keep the rest for the pub!!!!